I will be honest from the outset: my attitude toward Twitter in the past could have been described as ambivalent – at best.  And that would be somewhat charitable. I think the reason for my initial impression about Twitter is because I had understood Twitter to be an almost exclusively social phenomenon, where people go to scream at each other over political issues, or where cat videos, GIFs, and memes get shared around with the hope of going viral.  In short, it didn’t seem like a “serious” social network, the way that LinkedIn did, for example. And for many years, I happily ignored Twitter, never once thinking I was missing out on anything.  (Actually, my thought was that I was successfully avoiding needless distractions!)

After signing up for the COETAIL program, I realized that most – if not all – participants are using Twitter.  And it was encouraged that, as a COETAIL member, I also join in the Tweeting action.  So, in June of 2017, I signed up to Twitter, and spent the first several months simply “lurking” (creepy word choice, but that is what I have heard it described as) in the background – reading tweets of others, following a few people, and learning the basics of how Twitter works.

Well, after about 18 months on Twitter, I can say without any hesitation that it has turned out to be nothing short of a fantastic professional resource.  I’d like to spend a few more paragraphs describing the professional benefits that I have derived from Twitter so far.

Using Twitter, I have been able to grow my PLN well beyond my circle of past and current colleagues.  I am now connected with other educators from around the world, and despite the fact that I will likely never meet many of them in-person, Twitter allows us to share ideas, connect, and learn from each other.

I also find the wide variety of roles of the people I follow to be an important aspect of what makes Twitter so valuable for me.  I am able to connect with other educators who are in the same specific role as I am: high school chemistry teachers.  But this description only fits a small percentage of the people I am following.  Twitter has allowed me to gather the thoughts, ideas, and shared resources of not only other chemistry teachers, but teachers of other secondary subjects, middle school and primary school educators, digital coaches, writers, scientists, startup CEOs, professional organizations, and more.  In short, the variety of inputs to my learning on Twitter has been one of the keys to its effectiveness. In an age where people are pointing fingers at social media for creating an echo-chamber of like-mindedness, I find that Twitter has done the exact opposite for me – I am exposed to articles and resources about the arts, history, economics, mathematics, current affairs, and more, thanks to the diversity of my global PLN.

Strengthening My Existing “In House” PLN

I have also found that Twitter has strengthened the professional relationships that I have with my colleagues at my own school. Since joining Twitter and beginning to use it, I have found at least 10 colleagues that I work with who are also using it to share their thinking, learning, and resources. Seeing their tweets has allowed me to learn more about them as professionals, beyond the small slice of their lives that I see here at school.  This has sparked more than a few conversations in the staff room as we discuss articles, links, and ideas that we’ve shared online.

Additionally, fellow COETAIL graduate and current colleague of mine Andrew Grover and I have motivated each other to enhance and improve our use of Twitter, and both of our PLNs have grown and strengthened.  Like me, Andrew has found Twitter to be a valuable professional resource, and we are seeking opportunities to share our experience so far.. In January we will be presenting to fellow faculty and staff at our school about our use of Twitter, and we are also hoping to run a Twitter workshop for educators at the upcoming Swiss Group of Internationals Schools (SGIS) conference in March of 2019.  (We have submitted our proposal, but haven’t heard anything yet. Our fingers are crossed……)

There are many, many examples I could talk about, from finding podcasts, interesting blogs, relevant articles, and great people and organizations to follow. I’ll highlight only a few (in the interest of brevity) below for illustrative purposes, but there are many more examples I could write about.

The use of hashtags (#) to search for resources that I am interested in finding out more about makes searching for ideas and inspiration incredibly easy.  Over the past year or so, I have been very intrigued by the potential for Augmented and Virtual Reality in the classroom. One such Twitter search on AR and VR technology led me to the Twitter page of Jamie Donally, who is a leading advocate and consultant for this technology in education.  Her website has provided me with great ideas, and I never would have found it had I not been on Twitter.  One day I happened to notice she was offering download codes for a mathematics application for the Merge Cube, and I contacted her to connect and ask if I could have one.  Our exchange is posted below. This is a great example of how Twitter has allowed me to reach out, learn, and benefit from a global PLN. 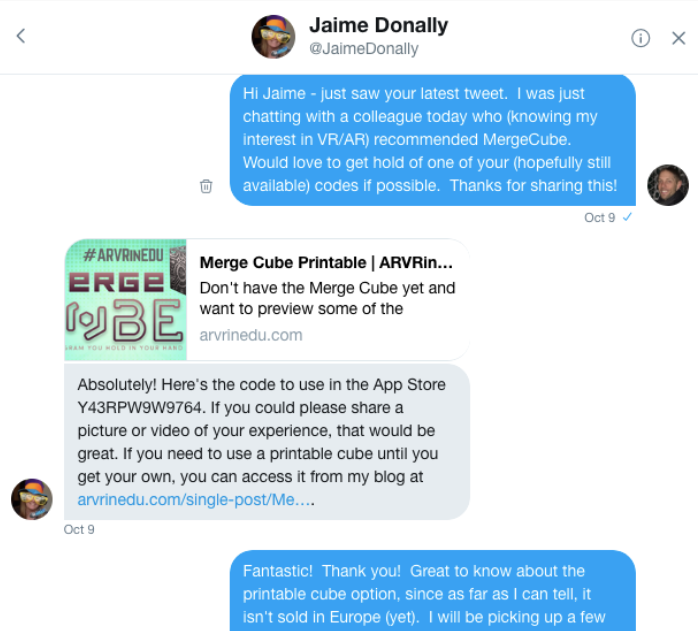 My discussion so far has focused on how Twitter has benefited me.  But one of the tangential effects of my use of Twitter has been my finding and sharing resources for my colleagues as well.  I am frequently finding links to articles and resources that connect to the curricula of some of the courses that my colleagues teach.  Sharing these resources with them transfers the benefit of my PLN to them as well. A recent example is this tweet from the University ETH Zurich, who published an article about predicted climate change impacts on Switzerland, where I currently teach.  I shared this article with the grade 8 science teachers, who will be teaching a unit on climate change in the coming semester. 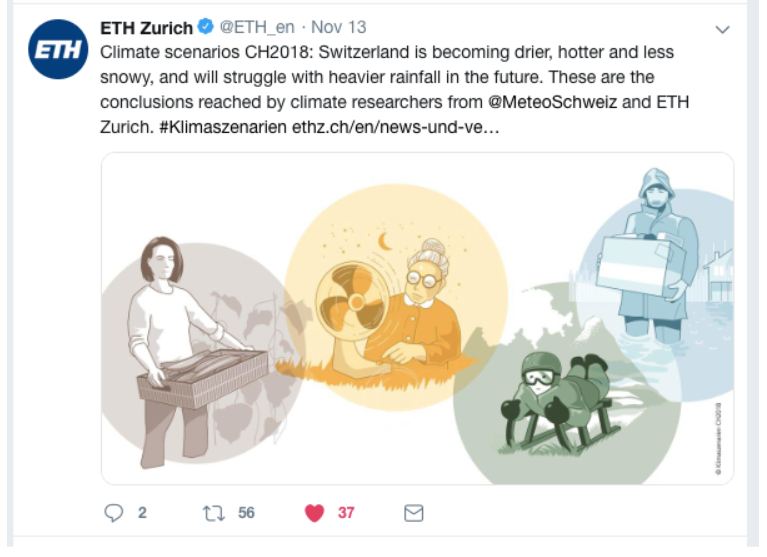 Another example just came across my Twitter feed a few days ago.  One of the people I follow tweeted about a service called “Skype A Scientist”, which is a free service that seeks to connect scientists and classrooms via Skype.  I shared it with my science department (via email, since not all of them are using Twitter) and already one of them has signed up, hoping to (virtually) bring a scientist into her MYP science classroom.

For those of you that are interested in getting started, the YouTube Channel “Technology for Teachers and Students” offers this short tutorial for taking the first steps.

I have to end this post by admitting that I had been completely wrong about Twitter as a professional resource.  Over the course of the COETAIL program I have consistently increased my use of digital tools to connect and share ideas in a variety of ways over a variety of platforms.  But it really is Twitter that stands out to me as having provided the most value. (Not that other platforms haven’t been valuable – I will talk about them in another post coming up shortly.)

Thanks for reading!  In what ways have you found Twitter to be useful? Are you using it in a creative way not discussed above?  Please share any ideas or thoughts you have regarding ways you use Twitter as a resource as a comment below, or alternatively, you can of course tweet it out to me as well.  Looking forward to connecting.

I am an IB DP Chemistry and MYP Science/Mathematics teacher, passionate about sharing my love of science with my students. I enjoy exploring ways in which digital technology can be applied to increase student engagement and motivation, and ultimately aid the learning process. When I’m not in the classroom, I can usually be found on a hiking trail in the mountains. View all posts by Brian Weisenstein